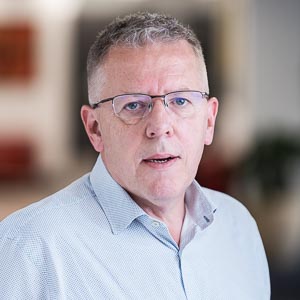 Hello, I’m Robert. I became a partner with Ecovis Wingrave Yeats in 2003 and have been Senior Partner of the firm since 2016. I’m also the elected Chairman of the Supervisory Board of Ecovis International. I have a pathological interest in the development of our international network and play a key role in supporting the development and implementation of the network’s overall Vision and strategic objectives.

In the UK, I specialise in the provision of financial management outsourcing to a range of longstanding international and UK based clients, across a range of industries, and have many years of experience in supporting international businesses in establishing and developing their UK market presence. Much of my work has been referred to me by partners at the much larger international firms and, increasingly from my network colleagues and friends.

Previously, I spent eleven years with PwC, where I played a senior role in providing audit and accounting services to a portfolio of global businesses across a range of business sectors and industries. I also built up a portfolio of overseas banking clients in the UK, largely from developing markets.

Whilst at PwC, I also played a key role in developing the firm’s practices in Central and Eastern Europe and was seconded to the region for a five year period. My responsibilities included the co-ordination and management of international assignments (including a number of privatisation initiatives within major industry sectors), the implementation of global procedures and risk management initiatives, staff training and development.

What I love about Ecovis is being part of a dynamic and nimble network with the opportunity to work closely with a wide range of committed individuals and friends from very different cultures. I am fortunate that my role within the network as Chairman of the Supervisory Board allows me to play a pivotal role in the strategic development of our network and witness its incredible progress over the last decade.

Outside of work, I am an avid traveller and like nothing more than meeting people from different cultures and backgrounds. I’m also an armchair sports fan, particularly rugby.

A singer, of course!

A doorman at an apartment block on Park Avenue, N.Y.C. – a real ‘eye opener’ to the extremes of human behaviour!

(Not so) secret pleasure – Eurovision. I also have a broad musical taste and don’t need much encouragement to sing at both formal and informal events. I have also recorded an album with a number of well-known Bulgarian musicians. All household names in Sofia!

Allowing people the freedom to express themselves to make mistakes and then watch them flourish and grow.

What one piece of advice would you give your 10-year-old self?

This place is not big enough for you!

A vet. (I obviously spent too much time watching “All Creatures Great and Small” – a great British classic.)

French, though not fluent by any means. I have also improved my Spanish (and Catalan) in recent years – Cada Dia una parabla nueva!

Ecovis & friends support the children & young people affected by the war in Ukraine. Read more about our efforts and please donate now!