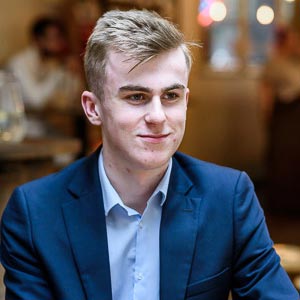 Hello, I’m Ben. I joined Ecovis as a school leaver at 18 after finishing my A Levels and have now worked here for 3 and a half years. I’ve grown into the role and been able to complete Level 3 and 4 of the AAT qualification and will be moving onto my ICAEW exams in the near future.

For my role, it’s incredibly important that I really listen my to clients’ queries and concerns to try to help get to the bottom of their problems. I make it a priority to get my work done in a timely manner too, that way I can ensure that clients get what they need sooner rather than later.

I really enjoy the problem solving nature of the work that we do. When looking at a set of accounts, if something has gone array I feel I can really get stuck into fixing it!

I’m an avid racer and will go karting frequently where I take part in championships. I’ve also recently gained an interest in golf, however, so far, my talent is lacking.

Realistically, it would be something to do with numbers, as I feel that is where I thrive. However, if I were to have a dream career, it would be a supporting role in a sports team, such as Formula One.

What’s the most daring thing you’ve ever done?

I climbed the tallest mountain in England last year. It was very tiring, but something I’d love to do again!

Ski in the Alps.

If you could have a superpower, what would it be and why?

Turn back time and be able to change things.